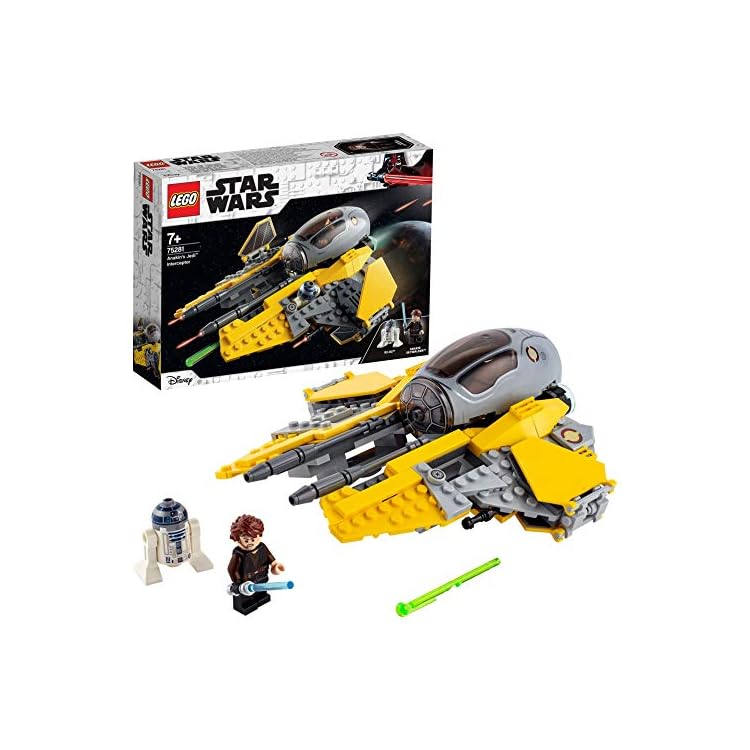 Product prices and availability are accurate as of the date/time indicated and are subject to change. Any price and availability information displayed on [relevant Amazon Site(s), as applicable] at the time of purchase will apply to the purchase of this product.

Young Jedis can pretend to be Anakin Skywalker launching into Star Wars: The Clone Wars or Revenge of the Sith battle action with R2-D2 and LEGO Anakin’s Jedi Interceptor (75281) building set. This Star Wars brick-built toy has lots of features to inspire creative play, including an opening cockpit to fit Anakin Skywalker Minifigure, spring-loaded shooters, foldable wing flaps with space for R2-D2 LEGO droid figure and clips for spare ammo and Anakin’s Lightsaber.

Great for solo or group play with friends, this entertaining building toy for kids aged 7 and up can be combined with other LEGO Star Wars sets to role play scenes from the Star Wars movies and embark on even more galactic action adventures and innovative fun. For added excitement, fans can also pilot the vehicle in the LEGO Star Wars: The Skywalker Saga video game.

Since 1999, the LEGO Group has been recreating iconic starships, vehicles, locations and characters from the legendary Star Wars universe. Every LEGO building set meets the highest safety standards here on Earth and in galaxies far, far away.

Build Anakin Skywalker’s iconic Jedi Interceptor featured in Star Wars: Revenge of the Sith and Star Wars: The Clone Wars
Includes Anakin Skywalker minifigure to sit in the opening cockpit of the Interceptor, plus an R2-D2 LEGO droid figure to sit on the wing
The Interceptor features a revamped design, 2 spring-loaded shooters for battle and foldout wing flaps for attack mode
Anakin’s Lightsaber and spare ammo clip under the compact Interceptor’s wing, perfect to fit into a kid’s bag ready for play anywhere
Comes with step-by-step, illustrated building instructions so young builders can commence with confidence